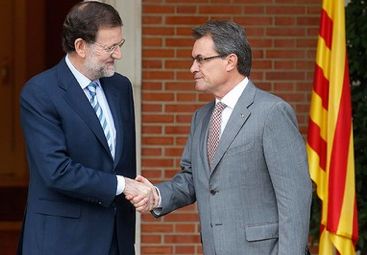 The chief executive of Catalonia, Artur Mas, this Tuesday invited the Spanish President Mariano Rajoy to join him at Barcelona on 29 November.

“If the prime minister has to come to Barcelona is obvious that is invited to come to the Generalitat (seat of the Catalan government). It would be nice that this meeting occurred, and if we have to extend the invitation in writing we will,” said Catalan government spokesman Francesc Homs.

The Spanish leader Barcelona will participate in a meeting with mayors of the Popular Party (PP), in the middle of the independence process.

“The door is open for the Government to give content to the dialogue,” said today Homs.

Rajoy on Monday sent a letter to Mas responding negatively to dialogue to call a referendum in Catalonia, that the Catalan president made to him in another letter sent after the unofficial independence consultation held on November 9 despite the veto of the Spanish Constitutional Court.