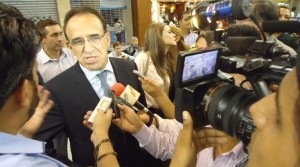 The Minister of Industries and Productivity, Ramiro Gonzalez, denied that his administration, in charge of the board of the Ecuadorian Institute of Social Security (IESS for its Spanish acronym), had affected in some way in the current crisis of the Teodoro Maldonado Carbo hospital of Guayaquil, which was declared in emergency on January 21.

At the arrival room of the José Joaquín de Olmedo airport yesterday, the former President of the Board of IESS said that during his tenure the hospital was left “on the march.”

“We made a partial reconstruction of the hospital, we already provided a reconstruction that was even presented to the press as a citadel of health, where even the City Hall allowed us to close two streets to make this.”

He also referred to the hospital in northern Guayaquil (Los Ceibos neighborhood) where he laid a foundation stone in March 2012 but the work was not developed.

“We put the money in the trust (a budget of USD 280 million),” he said about the project.

Gonzalez left the board of the IESS in May 2013 and after five years in that position, he did not rule out irregularities detected during his tenure as the theft of medicines and supplies, anomalies that are repeated until today. “Of course we found serious problems (…). But we put order all that and several people were fired,” he said.