BREAKING NEWS
Ecuador supports US initiative for a transitional government in Venezuela
The Ombudsman’s Office asks President Lenín Moreno to dismiss Paúl Granda
Correistas ‘trolls’ work to return to power and have impunity
Music: Elvis Crespo talks about his love song for Guayaquil
Cocoa and pitahaya, with problems to export
President Lenín Moreno extends suspension of the working day until April 12 and there will be no classes this month
The payment of the family protection bond for the health emergency began
Relatives of deceased from covid-19 do not have to approach agencies to register deaths
Coronavirus: Centro de Convenciones de Guayaquil will receive patients
Coronavirus cases in Ecuador April 1, at 17:00: 2758 infected

Raul Castro honors the five agents released by the US 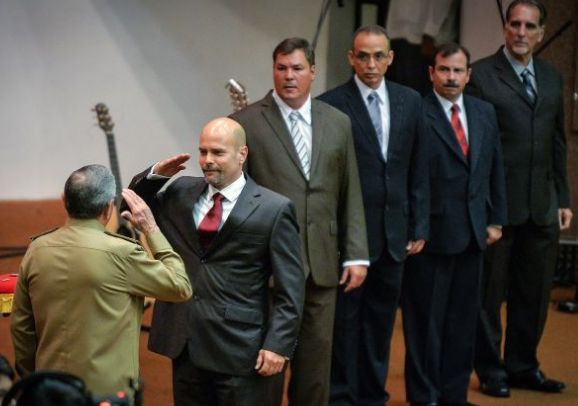 President Raul Castro honored on tuesday as “heroes” the five Cuban agents convicted of espionage in the United States, two of whom served their sentences and three were exchanged by contractor Alan Gross in December.

In a solemn ceremony at the Palace of Conventions in Havana, Castro granted Gerardo Hernandez, Ramon Labañino, Fernando Gonzalez, Rene Gonzalez and Antonio Guerrero, the orders of “Hero of the Republic of Cuba” and “Playa Girón.”

“The Five,” as they are known in Havana, were arrested in 1998 along with 14 people accused of integrating the “Wasp Network,” considered the largest group of Cuban spies detected in US operations.

The Cuban government recognizes the five as their agents, but always assured they watched out the anti-Castrista groups in Miami and did not spy the United States.

Rene and Fernando Gonzalez were released at the end of their sentence. Hernandez, Guerrero and Labañino, arrived in Cuba in December 2014, after the restoration of relations between the US and the island.

Correistas 'trolls' work to return to power and have impunity