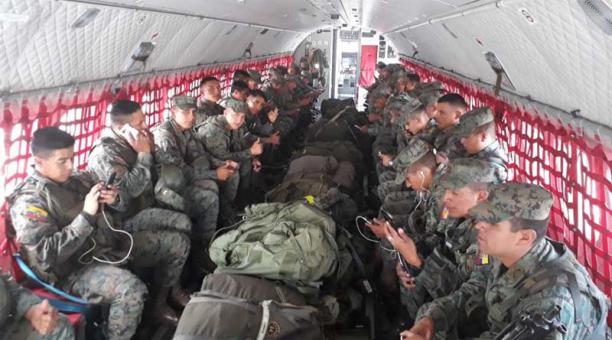 The commandos of the Patria Brigade traveled the northern border for five days. Equipped with rifles and helmets they patrolled border towns of Esmeraldas. One of the populations that sheltered was San Lorenzo, located in front of Colombia. In a house, built in the town of Mataje, there were weapons, ammunition, grenades and supplies to create explosives.

The operation left three detainees and now it is investigated if the group is part of illegal groups or dissidents of the extinct guerrilla of the FARC. The soldiers who captured the suspects are red berets, an elite army force.

140 men of that group, who today return to their barracks, intensified the controls in the border cordon. They were deployed along clandestine roads and passages that connect with Colombia. The idea was to detect the presence of criminal gangs dedicated to the trafficking of arms, ammunition, explosives and drug trafficking. These crimes are frequent in Tumaco, a Colombian municipality that borders Esmeraldas.

Llast week, 9,000 men from the Army, the Navy and the Colombian Police arrived to the site. The Government of that country ordered the strengthening of the coasts of the Pacific, which borders Ecuador. Local media reported that the president, Juan Manuel Santos, said that in that municipality operate criminal gangs and armed groups such as the National Liberation Army (ELN).

That information is also known to the Ecuadorian soldiers. For this reason, the operational commander of the entire northern border, General Agustín Proaño, told EL COMERCIO that the military maintains a constant guard in the areas bordering Tumaco and the department of Nariño.

The official indicated on January 15, 2018 that the presence of Special Forces soldiers is part of the planning for this year. In 2017, the support of a similar group was ordered twice. In June 2017, the then Defense Minister, Miguel Carvajal, said that the northern border is guarded by some 7,000 men. But Proaño preferred not to give details of the number of uniforms that operate in front of Colombia, although he assured that they have the “adequate personnel to guard and guard the border”.

In the last year, operations have left “good results”. In one of the operations, two gangs were dismantled that were engaged in drug trafficking between Colombia and Ecuador. The uniformed ones detected that the suspects set up a clandestine laboratory to produce drugs in a jungle area of San Lorenzo, 100 meters from Tumaco

The uniformed ones found the place, after mounting intelligence to the suspects. Last November, however, the Armada arrested two men who were related to the ELN. In that operation it was known that the strangers crossed the border to hide from the Colombian Army.

Official information says that they were leading criminal gangs in San Lorenzo. For the military of Ecuador, the identification of mafia members in that area is key. Military information points out that when patrols are increased in Colombian areas, suspects cross the border to hide in Ecuadorian territory.

The military distributions of Carchi and Sucumbíos, provinces that also border Colombia, are ordered to remain vigilant. During 2017, in Sucumbíos there were problems at the beginning of the year. Dissidents of the FARC terrorized with explosives populations that are settled on the banks of the San Miguel River. The situation has changed, according to the military guarding that area. However, the weapons controls and patrols in the jungle are maintained. In August, five people were arrested for drug trafficking. In that operation, which was conducted in conjunction with police officers, it was found that the suspects had weapons and ammunition. After the return of this group of elite commandos, the military leaders will analyze the date for the new incursion in areas that are in front of Colombia. (I)