Reelection of Ramirez in the CNJ is under analysis 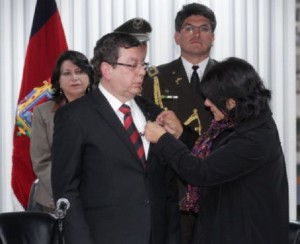 The absence of a constitutional and legal norm casts doubts that Carlos Ramírez opts for the reelection in the presidency of the National Court of Justice (CNJ for its Spanish acronym), especially when the Council of Justice (CJ) ranked him as the best evaluated judge, with 99.10 over 100 points.

Judges consulted indicate that there is no rule in the Constitution and in the Organic Code of the Judicial Function (COFJ for its Spanish acronym) that prohibits Ramirez to run for the highest court in the country for three more years in the first plenary session of 2015, which is scheduled for January 28 (in which the new judges selected in a competition will be appointed). The rule states that the president of the CNJ will last three years in office, but does not refer to the possibility of reelection.

Under these rules, the Court should appoint a new president in the first half of the relevant period by written and secret ballot.

However, lawyers in private practice agree that Ramirez, who has already served his term of three years (plus one of the transition period), must give way to a renewal.