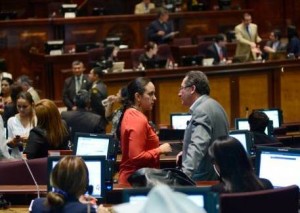 Currently the assembly has a Technical Audit Unit and the Oversight Committee to accomplish the control processes.

Simultaneously, it is analyzing a draft reform to the Organic Law of the Legislative Function and a consultancy project to compare the legislations regarding this issue. Alianza PAIS (AP) and the president of the Assembly, Gabriela Rivadeneira (AP), prepared the document.

Despite this, the opposition continues complaining of obstacles to the control.

Henry Cucalón (PSC-MG,) considers the control problem in the Assembly is due to “an existing submission attitude to the opinions of the Executive”, when the nature of the legislative is to control the executive branch, to put limits and control on it.

About this subject, earlier this year, Virgilio Hernández (AP), member of the team who formed the officialist bloc to work on a draft amendment of the Law on the Legislative Branch, said that changes on the control are considered in the draft.