Relatives of imprisoned protesters insist on their innocence 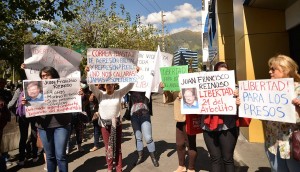 Four days after 21 of the 24 demonstrators were arrested in the surroundings of El Arbolito park (last Thursday), during the demonstrations against the adoption of constitutional amendments, their families insist on their innocence and clarify that the sanction of 15 days in jail is an excess of justice.

Yesterday morning, friends and family of the 21 sanctioned by “uttering expressions of disgrace and dishonor” against four policemen, gathered outside the Flagrancy Unit of the Prosecution, located in north-central Quito, to complain about what they describe as irregularities and violations within the process.