Remains in pits does not belong to missing people from Guerrero

On Tuesday, the Attorney General of Mexico reported that after DNA tests performed at the first 28 bodies found in clandestine graves in the town of Iguala (south), none of them belongs to the 43 students disappeared on last September 26 in Iguala, state of Guerrero.

Besides these five pits, the search operation for the 43 young people located another five clandestine burials, the last of them recorded on Tuesday with an undetermined number of bodies that are currently being analyzed.

Moreover the Prosecution reported that in the last hours they had captured 14 policemen from the nearby town of Cocula who falsified their official reports to hide that they were involved on the night of the students disappearances of Iguala.

These detainees have accepted that “they received the group of students and subsequently delivered them within the boundaries of the municipalities of Iguala and Cocula” to the Guerreros Unidos (organization), said Tomas Zeron, director of the Bureau of Criminal Investigation of the Prosecution. These are in addition to the 22 agents arrested in Iguala as accomplices to the crime. 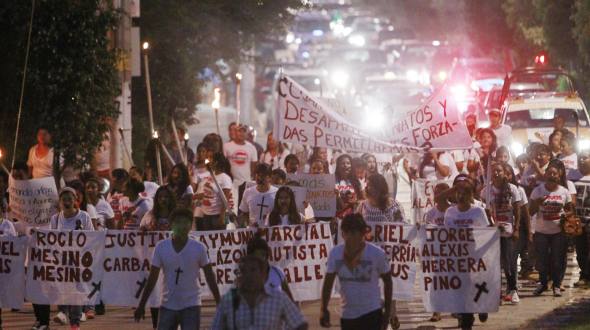 Relatives and friends of the 43 missing students in Iguala, held a march last night to demand their retrieval.