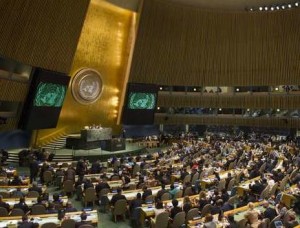 Venezuela, was elected Thursday as a non-permanent member of the Security Council of the United Nations (UN) in a vote of the UN General Assembly.

In addition to Venezuela, Angola, Malaysia and New Zealand were elected with two-thirds of the votes required. A second ballot will be conducted to define the fifth vacant seat between Spain and Turkey.

Venezuela’s candidature, which had the support of the countries of Latin America and the Caribbean, won 181 votes in favor of all 193 Member States.

President Nicolas Maduro welcomed the appointment and considered global ratification of the socialist revolution in the country.

Venezuela as well returns to the highest decision making body of the United Nations, for the fifth time, where it was already present in four different periods.

The new replace in January 2015 members who run out its term this year: Venezuela will replace Argentina; New Zealand and Spain to Luxembourg and Australia; Angola to Rwanda and Malaysia to South Korea.

Government expects that 70% of Ecuadorians have a smartphone in 2020