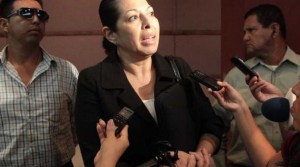 On Wednesday, the Minister of Justice Ledy Zúñiga showed reporters a part of the Gabela report. After that, Zuniga would have called Patricia Ochoa, widow of Gabela, and agreed to issue the document on Wednesday 11 (yesterday). However, in recent hours, the government said it will be delayed another week. This was stated in the Security Cabinet.

Ochoa indicates she has doubts about whether her husband was murdered by “common criminals,” as manifested by the Ministries of Justice, Interior and the Prosecutor.

Furthermore, she states she has an audio recording in which the conversation between the general and a colonel of Intelligence of the FAE can be heard. In the 5 minutes call, Gabela indicates the officer he knows about a “disposition” to follow him.

“What you’re doing is illegal. I don´t want that the ones who will follow me and my children do it around two or three blocks; I want them to be at just one step, ok? They have to be within walking distance. If something happens to me, if I am robbed , any situation, the culprits are you. You are the culprits for what might happen to me or my children,” said Gabela in the telephone conversation according to El Comercio newspaper.

Yesterday, Ochoa confirmed that the voice is of her husband and the Ministry of Justice was the one that would have sent the recording to her home on January 18 of 2013.

“The communication (between that Colonel of Intelligence and Gabela) only makes us see the version of Gabela on the facts and do not prove the monitoring raised by the General,” is indicated in the documents Zúñiga exhibited.

Government announces that electric cars will not pay tariffs