Report on first debate of the Telecommunications Act was aproved 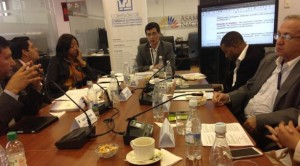 With 10 votes in favor and two against, the Committee on Autonomous Decentralized governments yesterday approved the report for the first debate on the new Telecommunications Act.

The topics include: The new royalties that telecommunication companies would pay and the creation of the Agency for the Regulation and Control of Telecommunications.

In the case of royalties, the draft maintains the table that seeks to raise between 1 and 9% of total revenues of the operators that have a market share of over 35%. This section would only affect Claro.

Henry Cucalón, Madera de Guerrero Assemblyman for Guayas, voted against the proposal and noted that the collection of new royalties is unconstitutional.

The President of the Legislative Commission, Richard Calderón, on critics about that this royalties would only affect Claro, said: “There are three companies, we want a balance, if you divide the market for three, it would correspond to them the 33.3%. If you exceed this balance it should be taxed”.

It was noted that the report would be delivered immediately to the presidency of the Assembly for debate and voting in the next plenary meeting.