Requests for popular consultation are waiting to be approved 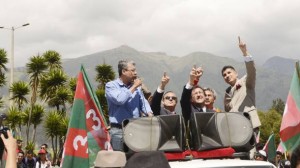 Three requests of popular consultation of Sociedad Patriotica (SP), Democracia Sí and Compromiso Ecuador, respectively, are being analyzed in the Constitutional Court (CC) and the National Electoral Council (CNE for its Spanish acronym).

These groups of different political tendencies, have the same goal: to block one or more points of the draft constitutional amendment of the political movement Alianza PAIS, which is discussed in Parliament.

Of the three, the most advanced in the process is that of “gutierristas” (members of Sociedad Patriótica party), which is in the CC.