Retired undertake way to achieve changes in the IESS 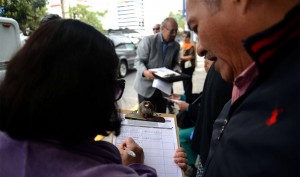 From 10:00 twenty retirees, former employees of the IESS and members of the Coordinator of Organizations of Retirees of Ecuador (Corjupe), gathered at the site to start the campaign to collect signatures to boost the process of the Assembly´s bill, as a citizen initiative. They need at least 30 thousand signatures.

The president of the Coordinator, Francisco Ortiz, explained that the collection will last until May and the goal are 70,000 signatures, in case the CNE dismisses some of them.

Their project involves the structural change of the Board of the IESS, in which neither employers nor the government will no longer intervene, but health professionals, experts in financial architecture and business management. Its members would be elected by a National Congress of Affiliates. In addition it is proposed that until the State is current in its payments the Biess will not grant more loans. The payment of the 40% state contribution to pensions is also required.

Traffic jams and flooded streets because of rain in Guayaquil

More than 1.5 tonnes of drugs and some inside fake bananas are seized