Retirees seek to submit law on the IESS 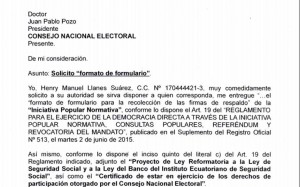 Through alternate Assemblyman Henry Llanes (CREO), adviser of the Front, they initiated the process in the National Electoral Council (CNE) to get the form to record the signatures.

Section 103 of the Constitution defines it as a form of “direct democracy” of citizens to “propose the creation, amendment or repeal of regulations before the Legislative Branch.”

The section specifies that they must be supported by not less than 0.25% of the people registered on the electoral register “of the relevant jurisdiction.”

Investments in the motorcycle assembly industry are not being recovered