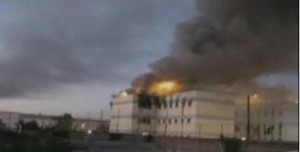 Early in the morning there was a riot at the San Miguel prison in Chile. The incident occurred because of a fight among the inmates which started a fire that caused the death of 81 prisoners and 14 injured.

Jaime Concha Soto, sub director of the Chilean Police stated, “So far we have 81 convicts deceased” regarding the worse tragedy on a Chilean prison. Meanwhile Jaime Mañalich, minister of Health said, “The 14 wounded have serious burns and they have been sent to different medical centers.” Mañalich also pointed out that three officers and one fireman were also injured.

The San Miguel prison has a capacity for 900 prisoners, however the structure housed 1,900 inmates according to the report given by the officers in charge. So far 200 convicts have been evacuated to police station prisons.

“The fire started in the upper floors of tower number five of the prison that is located on the south of Santiago,” informed Luis Masferrer director of Police, who also added that the flames began around 5:30 am.

The tragedy reflects the poor management of the Chilean prison, a subject of much debate in the past. Because Wednesday is the visitors’ day many relatives had gathered outside but they too suffered due to the desperation and several had incidents with the police.