Rolando Panchana will be Governor of Guayas 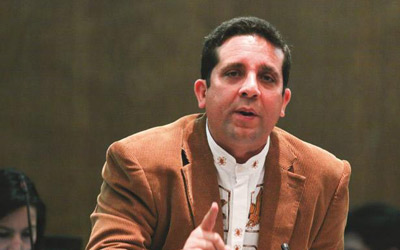 The journalist and former Assembly member of the party Alianza País, Rolando Panchana, will assume the role of Governor of Guayas; as reported yesterday by the President of Ecuador, Rafael Correa, during a discussion with the media in Guayaquil.

Panchana will begin to serve as Governor since tomorrow, once Viviana Bonilla, current Governor, resign from the position to run for mayor of Guayaquil.

Last September, with 6,000 signatures of support, the Federation of self-employed workers, retailers and social organizations proposed to Rolando Panchana as candidate for mayor of Guayaquil, however the political movement decided to appoint Bonilla as candidate.

Yesterday, during the opening of a kindergarten in the Nueva Prosperina district, Northwest of the city, Bonilla offered the first Ordinance which will be approved by  the “Mayor of the citizen revolution”, that is, the expansion of the urban perimeters of the city, to serve certain sectors.

During her last day as Governor, Bonilla was accompanied by some candidates of the Alliance AP and Democratic Centre, as the prefect Jimmy Jairala, who will run  for re-election; and Carlos Luis Morales, who will be candidate for Councillor.