BREAKING NEWS
United States company confessed that it paid bribes in Ecuador, Brazil and Venezuela
Court orders the National Police to arrest those sentenced in the Bribery case
Court orders to stop paying life pensions to Correa and Glas, and to imprison those sentenced in the Bribery case
Enough lighting fires in the Amazon rainforest, says Waorani leader Nemonte Nenquimo
In the United States, they accuse an oil subsidiary trader for alleged money laundering scheme
The Government of Ecuador denounces millionaire fraud in pensions of the Police
Nemonte Nenquimo, Waorani leader, is among the 100 most influential figures of 2020 for his environmental fight
Withdrawal of fleet of Chinese ships from the outskirts of Galapagos brings relief, but does not remove the danger for the species
Chancellor confirmed the process of expanding the continental shelf
Weakening of the dollar improves the country’s competitiveness in Europe and Asia

The night of this June 8, 2020, the Government Minister, María Paula Romo, said that one of the people who was injured after the accident of a light aircraft in Peru is Daniel Salcedo. 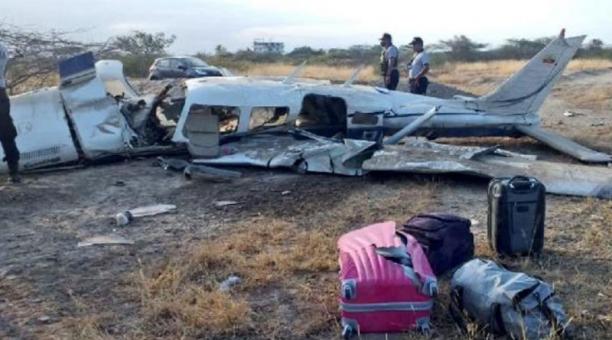 He is investigated for alleged purchasing irregularities during the health emergency unleashed by covid-19.

Romo said that the Ecuadorian Police worked with his peers in Peru and fingerprints of the wounded and the deceased were obtained .

After that work, the authorities received confirmation from Criminalística , whose staff confirmed Salcedo’s identity as one of the wounded .

At the moment, arrangements are made for delivery to Ecuador .

The crashed plane is from Alfredo Adum. This newspaper consulted him if he knows or is close to Salcedo . His response was as follows: “Never in my life.”

Salcedo is also known as a personal friend of Dalo Bucaram. The former legislator , on the night of June 7, at a press conference from the US, referred to Eduardo Salcedo . He did it after a journalist asked him if he was staying in a house that Salcedo has in Miami .

Bucaram Pulley said that he was staying at the house of two friends and that he could not give their names because he was not authorized.

However, de Salcedo said the following: “He is my friend, I have never denied him. I have said that he is an entrepreneur , that I have known him as an honest man , that he has supported me in my 2017 campaign and that I think he is being persecuted simply for having friendship with me ”.

United States company confessed that it paid bribes in Ecuador, Brazil and Venezuela