Rousseff leads the polls in Brazil 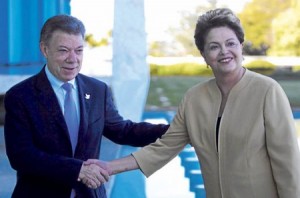 The criticism and protests around the World Cup do not seem to have affected the credibility of the Brazilians in the current President of Brasil Dilma Rousseff. She continues leading the polls for the election of October 5. Rousseff’s candidacy for reelection will be today at the National Convention of the ruling Workers Party.

According to the survey conducted by Ibope between the 13 and 15 of June, if the elections were held today, Rousseff would get 39% of the vote compared to 21% of Senator Aetius Neves, of the Brazilian Social Democracy Party.

Eduardo Campos, of the Socialist Party, would be in third place with a 10% support. The other candidates follow them, all with 3% or less of the vote, according to the newspaper Folha de Sao Paulo.