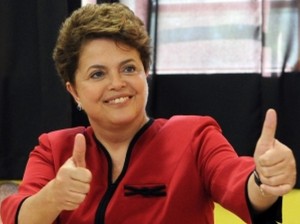 On Wednesday the president of Brazil, Dilma Rousseff, said she does not believe that the humiliating and historic defeat 7-1 of Brazil against Germany in the World Cup semifinals, could revive protests conducted since 2013.

“I do not think so. We had the experience of hosting the World Cup (…) in peace and with a great sense of celebration. There is a feature in soccer: is made of wins and losses, it’s part of the game,” Rousseff said in an interview with journalist Christiane Amanpour, from U.S. television channel CNN.

However, on the night of the defeat of Brazil in the World Cup, the police department of the city of San Pablo recorded a sack to a appliances store and a fire on several buses. Moreover at San Mateo, a shop was destroyed, a street was cut at Itaquera and, finally, another public transport vehicle was set on fire in Villa Constanza.

The World Cup in Brazil caused discontent and street protests across the country against the 11,000 million dollars from public coffers that were invested in the preparation of the tournament and which are claimed by the protesters for upgrades on health services, education and transport.

Today ends the fourth round of talks with the EU