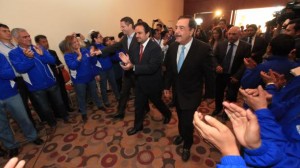 The formation of the so-called Political Front for National Unity in the Diversity (Frente Político por la Unidad Nacional en la Diversidad,by its Spanish name) which is integrated by local authorities of different political parties to the ruling one, is not well seen by Alianza PAIS (AP), which considers it “destabilizing” and with “electioneering purposes,” according to its Executive Secretary Doris Soliz.

This union was called by Soliz as “a political Fanesca (Ecuadorian fish soup)” that seeks to defend “the old status quo.” “What unites them are the electioneering interests and what they evade is to speak to the country what their real plan of action is. They have not said anything about a proactive approach to the crisis,” she complained to a local radio.

On Monday, 23 February, in Cuenca, the mayors of Quito, Mauricio Rodas (SUM-LIVE), and of Guayaquil, Jaime Nebot (PSC-MG), and the prefect of Azuay, Paul Carrasco, held a meeting; a manifesto with three points concerning the defense of democracy emerged of it, to seek alternatives to the economic crisis and boost joint work.

Furthermore, Luisa Maldonado, Councillor of Quito (AP), thinks this Front is preparing a strategy for the elections of 2017 in order to “finish” the official project and “destabilize” the country.