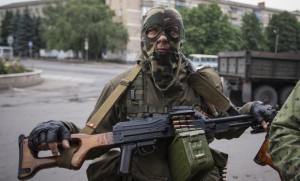 Russia asked today for an urgent investigation about the possible use of incendiary bombs by the Ukrainian forces.

“We are increasingly concerned to see the lack of the slightest progress in efforts to contain the violence, stop the fighting and end the Ukrainian crackdown”, said in Moscow the Russian Foreign Minister Sergei Lavrov.

Lavrov also said that Russia has called for an urgent investigation on the reports of the possible use of incendiary bombs by the Ukrainian forces.