Russia will receive more sanctions from the EU and U.S. 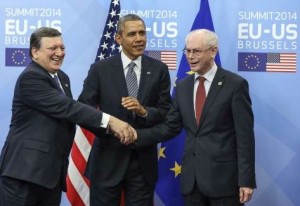 The United States (U.S.) and the European Union (EU) today agreed to work together to alleviate the dependence on Russian gas and prepare new economic sanctions in response to Russia’s actions in Ukraine, including some measures in the energy sector.

After a meeting with senior officials from the EU, U.S. President Barack Obama said: “if Russia maintains its current course, their isolation will increase, sanctions will increase and there will be more consequences for the Russian economy.”

Leaders of the Group of Seven largest world economies decided this week not to apply economic sanctions against Moscow unless Putin gives new steps to destabilize Ukraine and other former Soviet republics.

Meanwhile, the new Ukrainian authorities announced a 50% increase in gas prices since May 1, complying with a condition imposed to raise money from the International Monetary Fund, something that was denied to the president Viktor Yanukovich before he was deposed last month.

Therefore, it is expected that the IMF announces a rescue package for Ukraine of 15,000 million dollars in the coming days, said the Financial Times.

Patiño rejects the request of the IACHR in Jimenez case