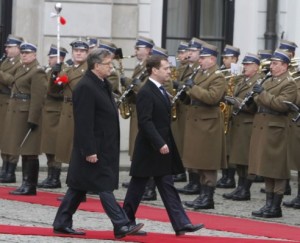 In the Warsaw memorial at Poland, Russian President Dmitry Medvedev paid his respects to the Soviet soldiers that perished in World War II. The Tuesday’s ceremony put an end to the contempt between Polish and Russian leaders, and thus improving their relations.

The Russian leader walked behind soldiers who placed a wreath at a large monument to mourn the Soviet troops that perished while driving the Nazis from Warsaw during World War II. Medvedev’s wife, Svetlana placed long-stemmed red roses.

Afterwards the Russian President would be traveling to Brussels for a gathering of the European Union leaders.