Different moments in the history of Latin America converge, overlap and confuse in the plastic work of the Cuban-Ecuadorian artist Saidel Brito. The geopolitical border dispute of the countries of the region is treated in an acidic way in his most recent series of paintings, ‘Letter to Barradas’, which oozes self-criticism towards what it means to be Latin American. 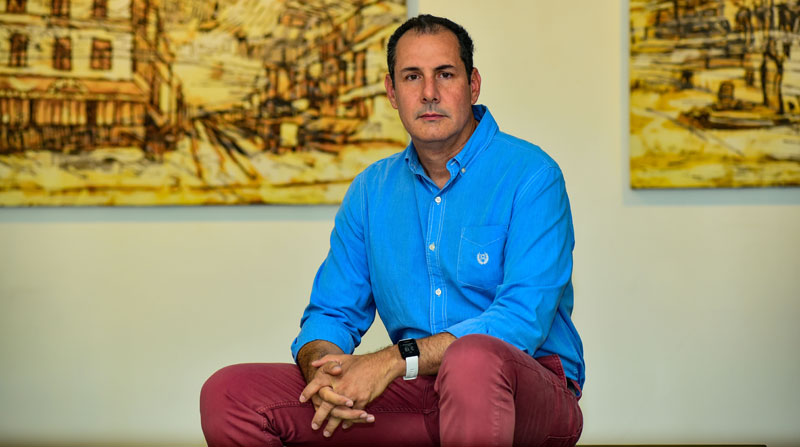 Could you be a baseball player?

I really liked baseball and basketball; in sixth grade I had to decide whether I went to sports school or into arts school. But the sports school was further away from home. After three years in the vocational, you chose what you wanted to follow and I had the dilemma again, I got one of the three places of the promotion for the National School of Arts. And from high school of athletic preparation I was called to make a career in baseball -I played first baseman-. I had to decide again, but it was the other way around because the school that was close to me was the sports school and the arts school was in another province, in Havana. I went to Havana.

How true is it that there is hardly any awareness of seeking to leave Cuba?

I don’t know. In my experience I never wanted to leave the country, sometimes I think I still don’t want to leave and I already live 23 years away. It depends on what you call to become aware. At 17 I began to have a critical conscience, coinciding with the fall of the Berlin Wall and the imminent demise of the Soviet Union. At that time it was not only I who gained critical awareness: people of very variable ages saw things from another perspective.

How do you see the rise of the San Isidro movement, Cuban dissent led by artists?

How beautiful and unusual that a government can be put in check by artists. I think it is tremendously courageous that artists are able to risk their lives for a cause. It is a phenomenon about which we have high expectations, because it is young people who from art generate a removal of a very staky structure of power, which removes the administrators of a failed experiment. Because those who are dealing with a reality as difficult as the current one in Cuba are administrators who have inherited something that they did not build or devise. The movement is calling for change.

How feasible are these changes actually?

There have been changes since the regime, but they are cosmetic. They are not in tune with the transformation of today’s world. The attractive thing is to see how the regime is on the defensive, it has lost the initiative for the first time, it is playing at the wrong time. There is a gap between proven tools of a very efficient control industry in the past and new technologies, connectivity, which have generated a schism in many of those once-efficient state control mechanisms. Those of the San Isidro Movement are voices that the present and the future of Cuba will hear.

How do you take on the genre of historical painting?

What people find strange is how my position is elusive, because the genre of traditional historical painting always evidenced the author’s position. Jacques-Louis David, the painter of the French Revolution, evidenced his political position. I am interested in disappearing that positioning. This allows me to dispute thoughts, ideologies, other people’s and even contrary events.

As in the most recent paintings, from ‘Carta a Barradas’?

When I come across these letters and the long epistolary between Joaquín Torres García and his friend Rafael Barradas I was struck by their reflections. The two were Uruguayans, living one in Barcelona and the other in Madrid, questioning their own artistic production, without full awareness of how significant it was going to be for the art of the region. His position – especially that of Torres García – is one of discredit and radical questioning of what Latin America is, dismantling that grandiloquent discourse on the region, so politically handled and which is also present as an academic pose.

Torres’ phrase about a Latin America of ‘lazy, apathetic and romantic’ people is lapidary.

These criticisms connect with epistolaries of Latin American heroes, including Sucre and Bolivar. The foundational aesthetic thinking of modern Latin American art and the founding political thought of the region had points of contact, a century away from each other. My reflection may be more radical: sometimes I believe that Latin America does not exist.

It seems to me that Latin America exists only at the discursive level. When I say that it exists only as a statement and speech it is because there is a romanticism behind the declaration of Latin America, a great naivety. I see so many differences, regardless of the coincidences that are there, so much distance in relation to the common good, between social classes, between countries so close, between regions of the same country, inherited infighting. So much difficulty in constructing even shared stories… Torres García’s quote from 100 years ago is outrageously clever. To say that was such a precise nonsense…

The stereotype of the Latino is that of someone passionate and cheerful. Is there an iceberg of apathy underneath?

In the tropics you may be apathetic to the culture of saving, a culture of progress or investment… But in general I can read an apathy towards compliance with the law, with respect for each other’s space, about agreeing on certain codes and complying with them, that these social pacts can be long-term and can be a point of convergence. That is not to say that this only happens in our region, but there are cultures that are more inclined to individual responsibility in the face of the collective, tolerance and even the administration of freedom.

He is originally from Matanzas, Cuba. Since 1998 he has lived in Ecuador and is Ecuadorian by naturalization. He won the first prize of the X Biennial of Cuenca. He was co-founder of ITAE and is a professor at the University of the Arts (UArtes) in Guayaquil.