From the negative experience left by a trip on a speedboat between Santa Cruz and Isabela in the Galapagos Islands in 2017 came the idea of designing and building a fast boat zero emissions and comfortable for the user,says Rubén Paredes, professor at the Escuela Politécnica del Litoral (Espol). 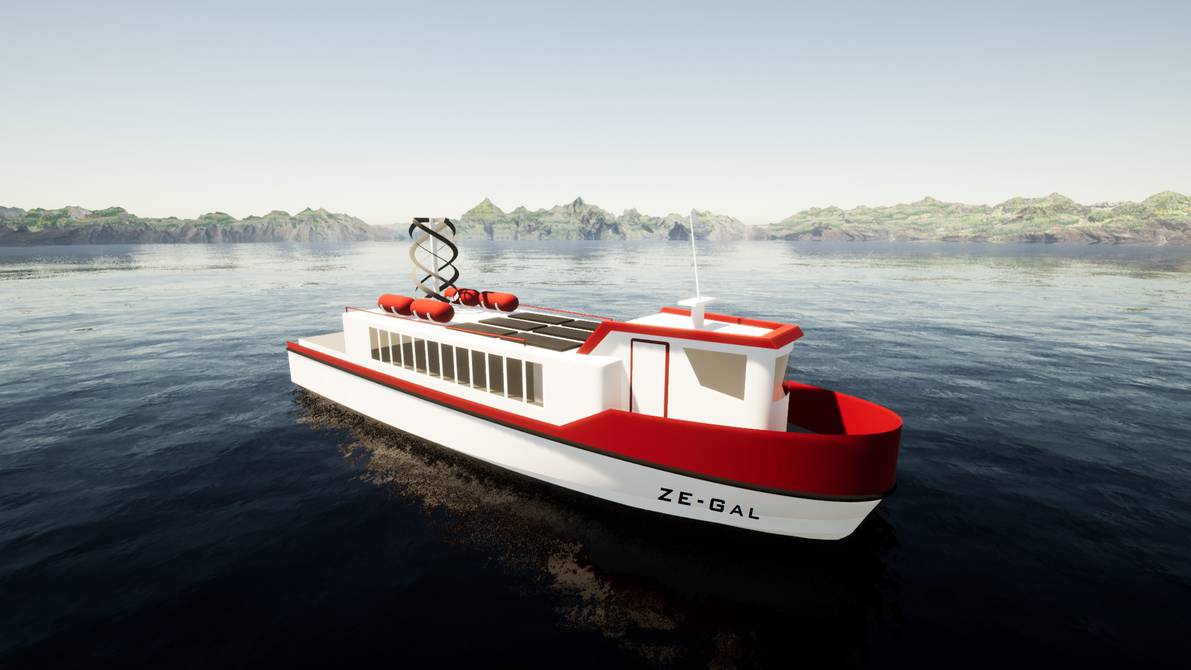 This is a conceptual model of the vessel that will design the Zegal project. It will move with environmentally friendly energy systems, generate no emissions and give comfort to its passengers.

The design of the current boats that are used for inter-island trips in the archipelago causes dizziness and blows in both settlers and tourists. In addition, due to the strength of the trip, usually, older adults and children must wait for certain times when the sea is relatively calm to make the crossing.

“The current boats are 11 meters long, have two to three outboard engines installed and use gasoline. The problem is that almost the entire fleet consumes about a million gallons of gasoline a year. Injured sea turtles have also been reported, as the boats hit them because they sail at 50 kilometers per hour and do not see them,”says the teacher.

This is why Paredes and a group of professionals from Espol, Astinave, Instituto Nacional de Eficiencia Energética y Energías Renovables and the Stevens Institute Technology are working on a boat design that would replace outboard engines with systems that do not use fossil fuels, in order to reduce emissions, increase passenger comfort and reduce collisions with turtles.

In fact, this project, called Zegal, was one of the winners of the Unpublished call promoted by Senescyt in 2018 and about $ 187,000 was awarded for its development. However, the funds, which will be administered by the United Nations Development Programme, were transferred only at the beginning of this year, making it possible to sign the contractual part with the professionals who will participate. The final designs are expected to be in two years.

An evaluation of the inter-island transport system with trips between the Galapagos Islands, a comparison of non-fossil propulsion alternatives, optimization of the current design of the vessels to reduce their energy consumption, among other factors, will be carried out.

“Before the pandemic began we had the opportunity foran undergraduate student and a researcher to visit Galapagos and conduct experiments that have allowed us to quantify the energy efficiency of current vessels,”adds Paredes.

The idea is to design and build a boat with just over 13 meters long, with a modification of the angle of inclination of the hull (which helps to reduce the mistreatment of passengers) and reduce its structural weight. Scale models will be tested in a hydrodynamic tank located in the laboratories of the Stevens Institute Technology, in the U.S.

Currently there are successful cases of boats with solar panels in Galapagos, but these boats are not fast and are used for very short trips. Then, for Zegal, the combination of solar, wind and hydrogen energy will be evaluated.

“We believe that this design will be well received by the owners of the current vessels that exist on the islands, as they will reduce their fuel consumption and give comfort to their passengers,” says Paredes.

In fact, the Transmartisa cooperative has facilitated its vessels to carry out the experiments and could be a potential interested in the final design. In addition, the Galapagos National Park has asked if this type of boat could be used for patrols in the reserve, since the design would go with the “philosophy” of the institution.

José Marín, also a teacher at Espol and a mentor to Paredes, indicates that Zegal seeks to improve transportation within galapagos and help the environment: “The only thing that justifies undergoing the current tapping of the boats is the beauty that is seen and enjoyed at the end of the trip. We really have a challenge in designing a boat that can move at the speeds of today’s boats. That’s why testing will be important.”

In addition, according to Marín, this project is an important opportunity to demonstrate that Ecuadorian universities are also incubating solutions to real problems that affect the population, in this case galapagos. (I)