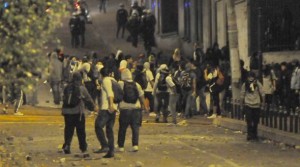 Today, at 09h00 sanctioned students of the Mejía National Institute plan to hold a march from the Bar Association of Pichincha to the Provincial Prosecutor’s Office, where they will submit a complaint for the police alleged abuse they suffered during the protests on 17 and 18 September.

Mauricio Chiluisa, President of the Federation of High School Students (Fese for its Spanish acronym), told El Comercio that there are 110 students from different educational institutions of Quito, to which disciplinary proceedings were opened, of which 68 are from the Mejia School.

According to Chiluisa, all were suspended for 15 days-while the investigations last – with the prohibition of entrying to their campuses.

The investigations carried out by the authorities of educational institutions are aimed to determine whether or not the students participated in the protests of 17S and 18S.

In the case the involvement of students in the above-mentioned events is proven, the students would be exposed to two types of academic sanctions: the temporary suspension not exceeding 30 days or the relocation to another school. These measures are set forth in the Organic Law of Intercultural Education.

National Assembly, along with CJ and CNJ will decide the deadline for the implementation of the Code of Processes

Disabled people will have access to loans of up to $ 15,000 for endeavors