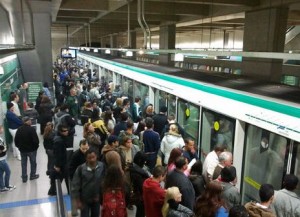 The strike by subway workers in Sao Paulo, which threatened to affect the opening of the World Cup, was averted yesterday, however employees of Rio de Janeiro airport declared a work stoppage of 24 hours in the main destination of fans traveling to Brazil.

About 1,500 employees Sao Paulo subway voted back against to strike by a wage dispute.

“We think it is now better to wait,” said union president Altino Prazeres, but added that would not eliminate the possibility of resuming the strike at some point during the tournament, which lasts one month.

The union announced that its members would perform a march on Thursday morning to demand that the 42 employees dismissed during the strike of five days be rehired.