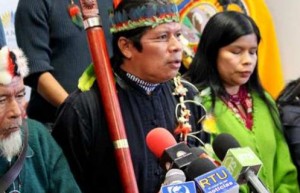 The Sarayaku people have denounced the police and military presence in its territory since last Friday, claiming they are looking for Cléver Jiménez, Fernando Villavicencio his adviser and manager Carlos Figueroa.

The leader Patricia Gualinga, through social media published the message: `Super Tucano aircrafts are flying over more than 15 times, in the territory of Sarayaku´ accompanied by a photograph of the alleged aircraft.

Given this situation, the Indigenous people declared an emergency, from 22:00, of Sunday and assured they will maintain the protection of Jiménez, Villavicencio and Figueroa. José Gualinga, Sarayaku President, said that the community is organizing to tackle any `unpleasant surprise´.

For its part, the Ministry of Defense issued a statement assuring that “there has been no presence nor overflights were conducted in the area with helicopters that belong to Armed Forces.”