Sarayaku, denounce the presence of the security forces 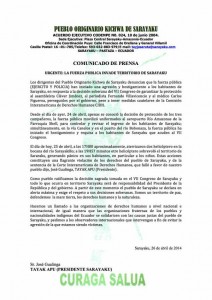 The leaders of the native people , Kichwa of Sarayaku reported yesterday, Friday 25 of April 2014, that the Government forces arrived in helicopter to Sarayaquillo.

According to a statement from the leaders of the Sarayaku people, Government forces just met the decision of protection of the three sentenced: Assemblyman Cléver Jiménez, the journalist Fernando Villavicencio and doctor Carlos Figueroa, mobilized uniformed to the Rio Amazonas airport of the Shell parish, to control and check the income of the inhabitants of Sarayaku. There was no version of the authorities on these allegations until the 21:53 yesterday.

Villavicencio and Figueroa also reported the fact on their Twitter accounts.

Municipal Board approves `per mile´ paymeny to bring the dredger