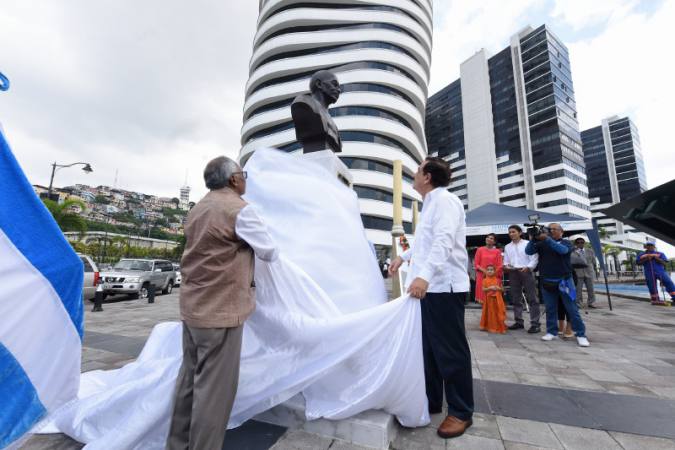 A sculpture to the Indian pacifist Mahatma Gandhi was unveiled yesterday morning at the Plaza del Paseo and Contemplación, in Puerto Santa Ana.

The sculpture was erected facing the Guayas River, and is located on a pedestal of almost 3 meters high.

The mayor Jaime Nebot, and Ravi Bangar, ambassador of India in Ecuador, were responsible for unveiling the image of the icon of pacifism.

According to the Mayor of Guayaquil, the placement of the sculpture represents the good relations that exist between India and the “Urbe purteña”.

Mayor Nebot emphasized Gandhi’s qualities, including his ethics, his practice of peaceful resistance, which the Indian pacifist used as a weapon to overcome problems.

The first municipal representative said that those virtues have placed him as a permanent example of what must be done to face adversity and achieve results without violence, without blood, with intelligence, with mysticism and with commitment.

“Beware of believing, because we would not have allowed it, that this is a monument to submission, to excessive tolerance, to infinite patience and bloody revolution, because Gandhi was nothing like that: he was a great fighter and great revolutionary” said the mayor during his speech.

The Indian diplomat, in turn, said that the monument will expose the life and the permanent struggle of the man who sought the revolution in a pacifist manner.

Bangar described as “historic” the cooperation that exists between Guayaquil and his country.

The sculpture of Gandhi was donated by the Government of the Asian country. (I)