Sea exit of Bolivia and Paraguay was supported by Correa 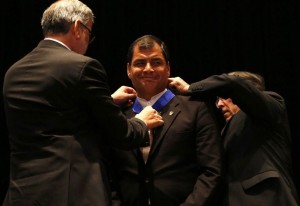 The President of Ecuador Rafael Correa advocated on Wednesday that the Mediterranean countries of the region count with access to the sea, and considered unfair that such responsibility falls on one country, as in the case of Chile regarding Bolivia.

“The region must seek that Mediterranean countries have exit to the sea,” said Correa  to Chilean media during his official visit to this country.

“I think it is so unfair that the responsibility is given to Chile. I have always spoken not only about Bolivia, but rather also about Paraguay,” he said in an interview.

Correa, who arrived in Chile to meet up with President Michelle Bachelet, stressed that the Bolivian maritime reintegration is mainly a regional issue.

Bolivia presented on April 15 the memory of its demand about the centennial dispute with Chile at the International Court of Justice (ICJ) in The Hague, to press Santiago to negotiate a sovereign access to the Pacific ocean.