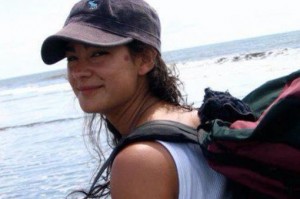 The search for the stranger who  threw acid at 33 psychologist Natalia Ponce de León and caused burns to 37% of her body, including the face, alert authorities in Colombia.
The Police Director Rodolfo Palomino, offered a reward of 50 million pesos (about USD 25,000) for information leading to the identification and arrest of the offender.

However, what matters most is that this is not an isolated case. Yesterday, in the Politecnico Grancolombiano , where the young professional assaulted completed her higher studies, was filled in a symbolic act of pink balloons to express rejection of the university community to any act of violence against women.

Abelardo de la Espriella ,Natalia’s lawyer , condemned that  in Colombia there is no law to regulate the sale of acid, which allows any citizen to be exposed to this kind of attack.
According to figures from the NGO Feminicidio.net, Colombia was in 2011 the country where most  acid attacks or flammable liquids against women occurs , 42 cases were registered while the Institute of Legal Medicine last year recorded 36 chemical attacks to  men and single women in Bogota. In 2013 a  total  of 97 victims of these attacks, 48 of which were women were registered in the country.