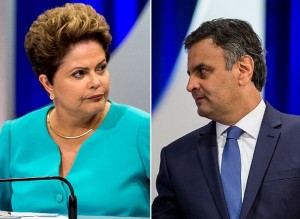 The Brazilian President Dilma Rousseff and opposition Social Democrat Aecio Neves once again crossed allegations of corruption and lack of ethics during the second televised debate between the two presidential candidates for the second round of elections on October 26.

Allegations of corruption and economic crisis occupied much of the debate that lacked of proposals by participants.

Rousseff accused Neves of having practiced nepotism by allowing his sister Andrea occupy a position of advisor during the period when he served as governor of Minas Gerais between 2003 and 2010.

Both candidates also confronted by the economic issue, after Neves accused Rousseff of not taking action to prevent the increase in the inflation rate and the fall in the rate of country growth.

“Your government will leave a perverse legacy for the future, with high inflation, low growth and loss of credibility. Without credibility there is no investment, and without investment there are no jobs,” said Neves.

Rousseff and Neves will be facing off for a third time on Sunday in a new debate.