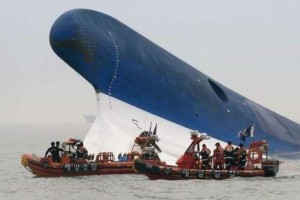 The South Korean Government reported that at least seven people have died and more than 290 are missing due to the sinking of a passengers ferry today, in southwest of the country,which raised the previous official estimate of 107 people unlocated.

The authorities said that more than 150 people have already been rescued, but it is feared that many are trapped inside the boat.

After ten hours, rescuers assured that there is little chance that those who are trapped inside could be still alive, and indicated that poor visibility and strong watercourses are making the rescue efforts harder.

Most of the passengers were high school students from the Danwon High School in Ansan, a suburb of Seoul, who were on a hiking from Incheon, in the northwest, to the island of Jeju.