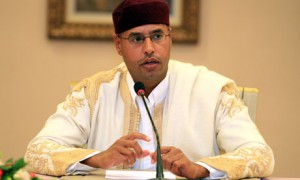 Saif al-Islam, son of Muammar al Gaddafi, proposed a democratic transition under his rule after his father leaves power. The New York Times branch in Tripoli, informed that an unidentified diplomat with strong ties in the Libyan government confirmed the statement.

The unidentified diplomat added that this could be the beginning of the Libyan government. However, The New York Times could not confirm the statements of the diplomat. The Libyan officials did not make any comments regarding this conversation. Mohamed Ismall, assistant of Salf al-Islam traveled to London to discuss the transition.

Meanwhile the rebel forces and the army loyal to Gaddafi fought heavily at the gates of the Oil Facilities in Brega, at 800 kilometers of Tripoli.