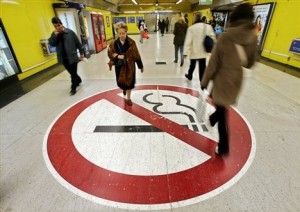 Spaniards would wake up on Sunday without being able to do what many consider a right: smoke a cigarette while having a drink at a bar. Now a new bill prohibits smoking in enclosed public spaces.

On January 2, the most restrictive tobacco bill in Europe would become on the strictest one. Spanish smokers will no longer be able to smoke in bars, restaurants, and coffee houses. It also prohibits smokers to be near hospitals, schools, or parks.

The new legislation substitutes the one of 2006, which already prohibits smoking in enclosed spaces, but allowed to smoke in bars, and small restaurants, while biggest restaurants were forced to create a smoker spot.

The new bill will be in effect after seven years after Ireland became the first country in Europe that denied smoking in public places. This caused an avalanche of similar laws in the entire continent.

Some Spanish hostels oppose to this new bill. Vice President of the Spanish Federation of Hostels and Restaurants (FEHR), Jose Luis Guerra, estimates that the restaurant sales would decrease a 5%, a 10% in bars, and a 15% in clubs, the bill came at moment of crisis were everyone struggles to move forward.

Guerra proposed a plan with an idea of smoking areas equipped with fans.

The British, Dominic Brisby, head of the Altadis Tobacco Company, of Imperial Tobacco considers this bill one of the most radical anti tobacco laws of the world.

Meanwhile the Ministry of Sanity, Leire Pajín, believes that the bill is a favorable step toward the public health of the country.

Ecuadorian Embassy Asks to Facilitate the Vote in Spanish Municipalities

Countries Celebrate the Arrival of 2011