Spanish shepherds claim their millenary right of transhumance of sheep 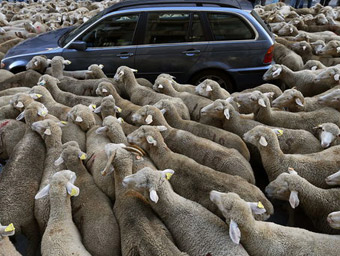 In order to defend the old right to transhumance, which its has been  threatened due to urbanization and modern agricultural practices, yesterday several pastors led a huge flock of 2,000 sheep that marched through the Centre of Madrid.

The tourists were surprised to see hundreds of sheep walking in front of the headquarters of the Government of the autonomous community of Madrid and the statue of Carlos III in Puerta del Sol;  at the surroundings of the Ministry of finance located  in the Alcala street; or next to the fountain of the goddess Cybele, next to City Hall, so they took the opportunity to film them and take several pictures.

Transhumance is an ancient practice that involves driving cattle each year from the pastures of winter, in the South, to the summer ones in the North, and vice versa.

Since 1273, it has been allowed to pastors to use transhumance routes that cross lands that at some point were open fields and forests until Madrid turned into a great metropolis, and from then, every year a group of pastors defend this right in the Spanish capital.

The shepherds are allowed to make use of 125 000 kilometres of ancient routes to move their animals seasonally, from cold pastures to high fields in the summer and to lower and protected lands in the winter.