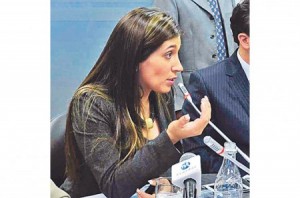 Amoroso said that 200,000 new taxpayers will enter to the database of the tax agency from 2015.

She also indicated that the figure presented in the document issued by the Ministry of Finance is of $ 15,481,000, of which $ 14,099 million come from the SRI collections, and the remaining $ 1,382 million are taxes that are part of the collection programming of the National Customs Service of Ecuador (Senae for its Spanish acronym).

The official said that the higher income tax for next year will be the Added Value Tax (VAT) with an amount of  $ 7,033 million compared to $ 6.314 million of this year.

Amoroso explained that this increase would be associated with the economic growth of the country.

Correa: Total petroleum income for the state budget is 18.57%