“Steps to facilitate peace” were agreed between Putin and Poroshenko 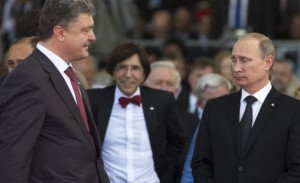 The presidents of Ukraine, Petro Poroshenko, and Russia, Vladimir Putin, have agreed “the steps that will facilitate the establishment of peace” in the separatist provinces of Donetsk and Lugansk, according to the president of Ukraine.

Kiev had previously announced an alleged agreement of a permanent ceasefire, which was denied by the Kremlin and clarified that the two presidents only discussed steps for peace this morning.

According to the new statement posted on the website of the Ukrainian Presidency, during the conversation, the two leaders reached an agreement on “the regime of ceasefire” in the region of Donbas, where Donetsk and Lugansk are settled.

In statements to the press in Ulan Bator, the Russian President considered that he and Poroshenko have made an approach to find a way to resolve the conflict.

Meanwhile, a spokesman for the Russian government recognized that there was a “basic agreement” to facilitate an end to the fighting.

Rousseff and Silva starred intense debate ahead to the Brazilian elections