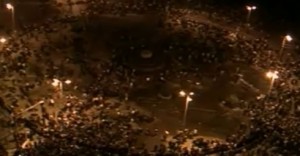 This Thursday thousands of workers left their jobs to join the protesters that demanded a change. Protesting lawyers toppled barricades at Cairo’s Abdeen Palace, the police protecting the palace fled the scene when the uprising surged while the protesters could not enter the palace due to its heavily armed protection. The 17th day protest moved back to the Tahrir Square to demand the immediate resignation of Mubarak.

The demonstrators were re-energized by the strikes called by petroleum, railway, and telecommunications employees seeking better compensation. A few hours later demonstrations renewed their efforts despite the growing fears of a government collapse.

Several important officials fear that an immediate departure for president Hosni Mubarak could be a recipe for disaster. Meanwhile the CIA Director Leon Panetta informed that the president could step down tonight. Recently the president of Egypt revealed that he will speak to the nation from his palace in Cairo this Thursday evening.

Mubarak Steps Down On Day 18 of Protests