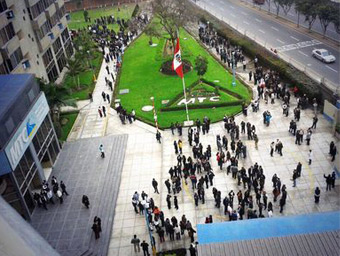 The United States Geological Service reported that yesterday an earthquake of 6.9 magnitude shook the coast of the South of Peru, and mainly affected the region of Arequipa, leaving at least six people injured.

The earthquake had its epicenter in the sea, about 80 kilometers from the town of Acari, at a depth of about 33 km, and caused the collapse of a large number of houses and roads in several districts of the province of Caravelí, where the epicenter was located.

The Secretariat of management of risks of Ecuador, reported through its Twitter account that the earthquake in Peru did not generate an alert of tsunami for the Pacific coast.

For his part, the President of Peru, Ollanta Humala, said he will anticipate  his return to Peru from New York, where he is participating  in the United Nations General Assembly, to meet the emergency caused by the earthquake.

The last earthquake of great magnitude occurred in 2007 in the southern region of Ica, it has a magnitude of  7.9 degrees and left 500 people dead and millions of dollars on economic losses.