Student teachers who starred outrages in the seat of government in southern Mexico, threaten to radicalize the measure 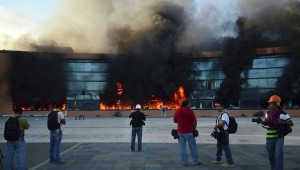 Hundreds of students from the Normal de Ayotzinapa (School for teachers) and teachers of the CETEG, burn the Guerrero Government Palace in protests over 43 missing students.

On Monday afternoon, 200 students of the Normal de Ayotzinapa (School for teachers) and 500 CETEG teachers, staged riots at the headquarters of the Government Palace of Guerrero, burning buildings and damaging the local town hall Congress and seat of the capital of the state, in protest against the disappearance of 43 university students in Iguala.

The demonstrators demanded the resignation of Guerrero´s Governor, Angel Aguirre, whom they blame for the disappearance of 43 comrades since last September 26, after being attacked by local police and drug hitmen in Iguala.

Demonstrators who were repelled by riot police with fire extinguishers in front of the local parliament, were mobilized to the mayorship of Chilpancingo, 275 km from Mexico City, where they caused serious damage to the building.

The rebels threatened to increase actions and radicalize the measure if until monday midnight, the governor informed of the whereabouts of the students.

Authorities fear that the 43 missing university students had been killed and buried in unmarked graves found in recent days in mountains near Iguala, where hitmen arrested over the case confessed they buried them.

Neves crosses accusations with Rousseff in the first broadcast debate