University students gathered in El Arbolito Park, a march for dignity was held due to the rejection of the Higher Education Law veto, supported by the Assembly. 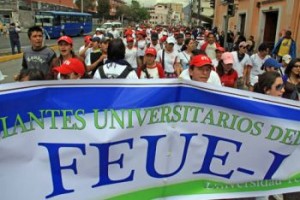 About 3,000 people, students, teachers and public and private universities staff are expected to go to the main.

University students will not obey the lay and they assure they will present an unconstitutionality demand. “The law was approved in a very irregular way,” said Daniel Cuéllar, who is the President of Guayaquil FEUE and declared it was a peaceful march.

Executive veto is awaiting its approval, with no quorum it will probably go through the Law Ministry.

National FEUE president, Carlos Mandiola says that yesterday’s manifestations are living proof that there never were enough votes for the approval of the law.

Cuéllar added that the law is illegal, unconstitutional, and anti-democratic, signs will be gathered in class rooms in order to ask the National Assembly’s President, Fernando Cordero, and Alianza País Assembly members to resign.

Apple Iphone 4 is Now in Ecuador