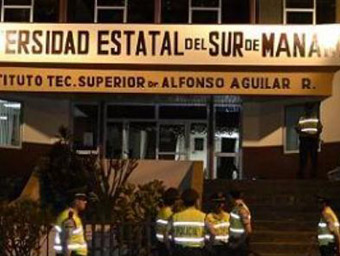 The Ministry of the Interior reported yesterday in a statement on October 1 arrived to Quito Christian C.V., who is linked to the death of the Jipijapa Prosecutor, Ramon Loor.

Christian C.V. was transferred yesterday to the city of Manta, province of Manabi, where he will face a criminal process against him.

The defendant, who had an arrest warrant since las September 9, resided in Cuba, from where he was extradited  with the collaboration of the police authorities of that country, where he was a PHD.

“The perpetrator of the crime, would have pointed out that he was used by Cristian C. V, Johan C. V. and Jorge C. M., who worked in the University of the South of Manabi (Unesum), and who were arrested last August 11, to commit the murder against the Prosecutor Loor”, according to the statement.

According to police sources, Loor was investigating the murder of the professor, Jorge Velásquez Campuzano, who was in charge of the public procurement portal of the University, and who discovered an alleged embezzlement.

The State University of the South of Manabi (Unesum) has been intervened  by the Council of higher education (CES), to establish whether there were irregularities in the public procurement system.