SUMA-Vive and Alianza País submitted proposals for the subway 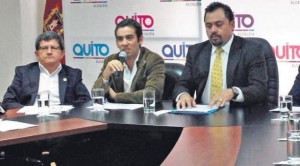 The SUMA-Vive and Alianza País Councilors block officially submitted to the Mayor of Quito, Mauricio Rodas, their proposals to cover the financial gap of the subway.

The document, prepared by SUMA-Vive, requests the profits generated by hydroelectric plants located in the influence area of Quito, to charge carbon fees for emissions reduction, a percentage of the surplus generated by metropolitan companies, to optimize the project, to securitize the revenues of the Mariscal Sucre airport, to agree with Quiport so the revenue of the air terminal administration increases from USD 10 million to 50 million annually and grant the airport Free Zone to the Government.

With this, USD 180 million would be collected by the sale of coercive NPL, the marketing of the free zone would mean 1000 million.

Of 10 points raised, the Alianza País block coincides with SUMA-Vive in three: to optimize the project, to securitize the airport revenues and to define mechanisms to capture the value of the capital gains in the area the subway will operate. Moreover, other options are added, like: assigning the construction of electrical substations, negotiating indirect project costs and marketing unproductive assets, in addition of optimizing the collection of taxes, among others.

The administration of the City Hall shall analyze the feasibility of this proposals. In order to hear a response from the Mayor, a maximum period of 30 days was raised.

It is expected that in today’s meeting of the Metropolitan Council this topic will be discussed; however, no reference to this issue is made in the agenda.

New package of amendments would be ready for January