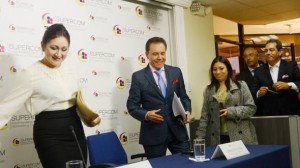 The Mayor of Quito, Mauricio Rodas, stays in his position of not paying the fine of $ 3,400 for allegedly censor a radio program. The Superintendency of Communication (Supercom for its Spanish acronym) sent yesterday to the General Comptroller the record for the payment to be made through a coercive measure.

The Superintendent of Information and Communication, Carlos Ochoa, yesterday announced the decision to submit the resolution that condemns Rodas to pay a value of ten basic wages, for “censorship,” established in Section 18 of the Communications Law, to the control entity, since the body did not register this deposit in its bank account in a term of 72 hours.

The complaint filed by Francisco Herrera, Director of the Ecuadorinmediato website, indicates that Rodas “censored” him by preventing the broadcast of their program “The power of the word”.

“I want to make clear that the decision of the Superintendent is not due to any political action of persecution as the Mayor has pretended to make believe the citizenry,” said Ochoa.