Superintendent of Communication seeks to radicalize sanctions through reforms 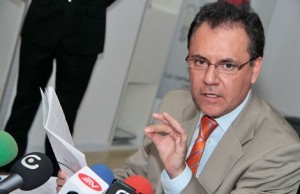 The Superintendent of Information and Communication, Carlos Ochoa, said several reforms to the Communications Law will arise to put sanctions that are proportional to the faults committed.

“It can not happen that the law asks for a simple public apology, for example, in the case of media lynching. It is a new law, we believe it is in our hands the opportunity to improve it”, said Ochoa.

These changes, he said, “in no way” shall include a financial, but “it’s a possibility that is being analyzed.”

Ochoa noted that several gaps have been identified, including in Article 68 of the sexually explicit content that is broadcast in the audiovisual media that have to be transmitted in a schedule for adults. The Superintendent proposed this to be extended for the print media.