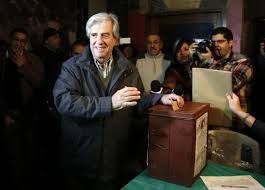 Analysts point out that Tabaré Vásquez, Uruguayan ex-president and candidate of the ruling party, is the favorite to succeed José Mujica in the presidential elections of October.

Uruguay held last Sunday its primary elections in which 2.6 million citizens chose the candidate for the presidential elections of October 26.

The surveys show Senator Constanza Moreira with 16% of the votes compared to Vazquez, who would have over an 80%.

Tabaré Vázquez, an oncologist,  was the first left-wing president of Uruguay since this country proclaimed its independence in 1825. He won the presidency in 2005 and ruled until 2010. Mujica succeeded him and finished his mandate with an 80 % approval. Currently, surveys give him the first place in the presidential with 43 % of votes.

Gerardo Caetano, Uruguayan political scientist, explains: “Although from the outside the country and in 2014 this is hard to believe, in Uruguay Tabaré has more popularity than Mujica. Consistently , from more than a decade ago all surveys locate Tabaré as the most popular politician of Uruguay, beyond the discontent that also generates his figure in some sections of the left”.