Tabaré Vázquez designates his cabinet 48 hours after elected in Uruguay 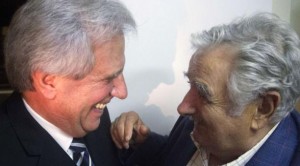 Tabaré Vázquez will lead the third consecutive government of his political force. The future president quickly defined his cabinet, 48 hours after being elected, which he said could realize thanks to the “previous experience and thorough knowledge of all who will form the next cabinet and those holding the positions now,” said Vazquez accompanied by the ministers and secretaries appointed.

The Ministry of Foreign Affairs will be headed by Rodolfo Nin Novoa, Eduardo Bonomi will be in charge of  the Interior Ministry, in Livestock he chose to continue with the current Minister Tabaré Aguerre, while Lilian Kechichián and former guerrilla Eleuterio Fernández Huidobro remain at the forefront of Tourism and Defence, respectively.

The current Vice President Danilo Astori also will serve as Minister of Finance.