Tame aims to be profitable in 18 months 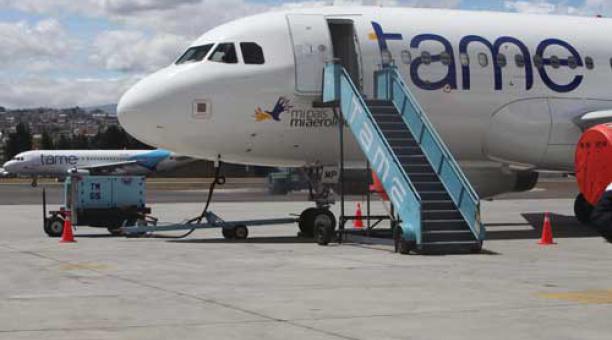 The airline Tame expects to stabilize and start generating surpluses in a period of 18 months, counted from last month (March 2018), explained the president of the Company Coordinator of Public Enterprises (EMCO), Edisson Garzón.

The generation of surpluses will allow the payment of the loan granted by the Ministry of Finance, for USD 61.27 million.

The loan payment should be made every month, starting in 2020, Garzón explained. Therefore, it will be necessary to lower expenses and increase revenues. The loan delivered by Finanzas was the product of a cooperation agreement, signed last March between EMCO and that portfolio.

USD 50 million were delivered in cash and will be used to cancel debts (USD 22 million) and to cover obligations postponed since 2016, the state airline explained. The balance was delivered in securities of the Central Bank for the payment of debts with the Internal Revenue Service (SRI), which, according to the firm, was inherited and not processed in the period 2014-2015.

The state stressed that the credit “is not a subsidy but a permanent contribution with repayment conditions.” Until last November, the obligations of the airline amounted to USD 194 million. Of this amount, 175 million corresponded to long-term debt and 19 million to accounts payable to suppliers, in the short term.

In 2017, according to preliminary balances, Tame closed with a negative result of USD 60 million. However, between last October and March, the airline has recovered 7.5 million accounts receivable, 71% of the total.

To achieve stabilization, the company has resorted to different strategies that allow it to lower costs and achieve profitability. One of the measures to reduce expenses is the reduction of personnel. Although in the last 10 months only 19 people were disengaged, closing the payroll last March with 1,375 workers, the company explained that it decided to close 317 vacancies, which generated an annual budget savings of USD 6 million.

This forced the firm to consider the “replacement of critical positions, which allow us to increase the capacity to respond to contingency and daily operation”. He added that potential future dismissals will only be determined after a process of reorganization of the company.

The optimization of the fleet is another objective of the airline. “We are going to stay with two types of aircraft to have spare parts for everyone. And to achieve that, you have to return planes, “said the president of EMCO. The company is in that process.

From January 2017 until now it has returned two units: an Airbus 319 and an A320. In an interview given to this newspaper last October, Ignacio Vallejo, president of Tame, explained that the airline should operate only with Airbus and ATR aircraft, and leave the operation of the Embraer, a high-end aircraft.

In addition, in the future it plans to operate only with leased aircraft. Currently the company’s operating fleet is seven aircraft, of 13 in total. The rest is in scheduled maintenance, waiting for shipment to maintenance or in the process of return. The company has also considered the sale of its five own aircraft and 11 real estate.

However, the process still does not start. Flying only on profitable routes is one of the strategies that is already underway. On February 3, the last flight on the Quito-Bogotá-Caracas route was made due to low profitability and technical problems at the Simón Bolívar International Airport. While on the other hand increased the frequencies to national destinations: Baltra (Galápagos), El Coca (Orellana), Lago Agrio (Sucumbíos) and Santa Rosa (El Oro).

The airline operates 12 national destinations (five of them have no competition) and four international destinations. Although Tame is not yet a profitable company, the airline begins to improve its operating indicators. In the first quarter of this year, employment grew six percentage points in relation to the same period of the previous year.

Punctuality increased by eight percentage points and compliance with flights by five points. Among the objectives of the airline are to grow in the local market, increase the occupation, make the operation more profitable to Galapagos, boost the charter business and develop the cargo business. Once it is profitable, Tame plans to become a mixed economy firm, through strategic alliances, preferably with foreign partners, said Garzón. (I)